Tara Brown was born in in Nanaimo, Canada on January 30th 1978. She writes Paranormal Romance, Post Apocalyptic and Fantasy novels. She self-confesses that all of her books contain sexual content and swearing, She lives with her husband, her two daughters and her Beagle named Buster. She names Dean Koontz and Stephen King amongst her literary influences.

This book starts by telling the story of Aimee, an 18 year old high school student. Aimee is everything her twin sister is not – her sister lives life to the max, is spoilt, gorgeous and, to be frank, very stupid. I believe she is what you would call an airhead.

Aimee is struggling with life. Her mum died 9 months previous and Aimee carries a guilt – the guilt being that if she enjoys life she is disrespecting her mother’s death. Everyone around her, her dad and her best friend especially, want her to come out of her shell, but it’s hard to live life when you lose someone so close to you. Aimee is going through the paces of her everyday life but is only comforted by the special spot by the side of the road where she feels her mum is with her.

Life is more complicated by the fact that Aimee loves her sisters boyfriend Shane. She has as far back as she remembers. He is the one she wants for her first kiss but he is with her sister. For that he is tainted and Aimee knows that she can never be with him. It hurts more knowing that he is nothing serious to her sister, who discards boyfriends like it means nothing.

One night Aimee reluctantly agrees to go with her sister to a house party at Shanes house. That night her life is turned upside down like she has never experienced before. Near death Aimee crosses *in between* and sees the elusive guardian angel that nobody else can see. She is drawn to him physically and wants to know more but he resists her at every point. Nobody believes her when she talks of him and she is determined to find out who he is, proving that he is not a figment of her imagination.

This story tells of Aimees battle dealing with her finding the person who nearly killed her, exploring a new relationship with Shane and facing demons that were only told as horror stories on dark nights.

When Aimees life is ebbing away she is forced to make a decision that will take her away from all she loves and knows and throw her into a cruel, sterile world where she becomes the demon she had always feared. This is just the beginning for Aimee, but for her it feels like the end of all she she lived life for. Can Aimee truly face what she has become and do it without Shane?

This is the first of 5 books in the Cursed series. It’s what I call a background story. It tells everything that happens before Aimees life is completely and irrevocably changed forever. It’s a great read and I went on a journey of change with Aimees character. I am really looking forward to reading the remaining 4 books to see where Aimees new situation leads her and see if she can ever gain inner peace.

Recently I won a book from Good Reads website. It was called Bagpipes & Bullshot by Janice Horton. Being my first book review I decided to look into the author so that you know a bit more about her as well as her book. 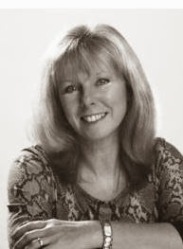 Janice Horton is a Scottish lass true to heart. She lives in Scotland on the side of a hillside. She writes fiction novels that have a feel of romance and humour throughout. She has novels you can read such as the one I have reviewed and also others that i am looking forward to read and review in the future. i have found out that Janice also has Vodoo Romance novellas to add to her accreditation. She has also just wrote a non fiction book called How to Party Online. She is a very popular author with nearly 6000 members on her Twitter profile and she is very active in the online community.

So – onto the review of Bagpipes and Bullshot itself. I am posting on here the review that I wrote on the

Good Reads website so you can pop over there to have a look too. I give this book 5 out of 5 stars as it is simply fantastic and addictive! My husband Mike couldn’t get a word out of me for two days! 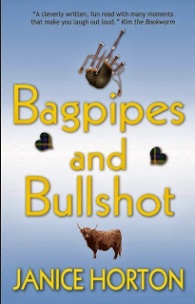 This was a fantastic book. I won this book and I had not read a book by Janice Horton before. This book told about Orley, a young woman living in Texas who had yearned to go to Scotland for as long as she could  remember. Then she meets Innes, a gorgeous Scottish Laird who offers her the job of a lifetime in Scotland working with him on his estate. She is unsure whether to go as her past hangs over her like a dark cloud but she is desperate to escape. She is also confused as to where her relationship with Innes really stands – is she his girlfriend working for him or does he just see her as an employee?

Orley takes the chance to travel to Scotland and is soon captivated by all she sees. But everything was not as she expected. The estate is in a state of financial ruin, Innes holds a secret that he did not tell her and all is depending on her expertise to save the Buchanan fortune. Throw in a hostile neighbour, Innes mother and a series of accidents all twisted in with her Scottish romance with Innes and you find yourself with a captivating story.

This book took me two days to read – I literally could not put it down. I fell in love with Scotland again through Orleys eyes and I was willing her romance with Innes to work, despite everything that was against them. This book is full of romance, history and laughs. It is definitely a book that once you pick up you can’t put down until you are finished.